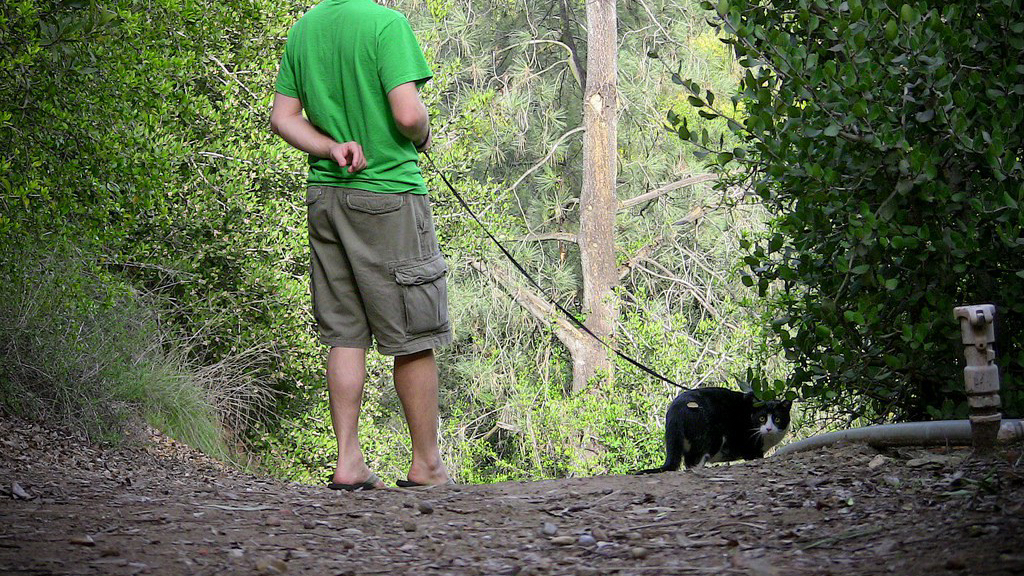 Portagers could soon be singing, “who let the cats out?” if mayoral candidate Billy Neepawa is elected.  Neepawa made another major announcement to add to his already substantial platform, with a plan for an off-leash park for cats.

“It is time for cats and their human friends to gain the same access to exercise and recreation canines enjoy,” Billy Neepawa proclaimed at another marginally attended press conference.  “When I am elected I will establish an off-leash outdoor recreational area for cat shepherds to bring their felines to and let them run free.”

Neepawa brought several of his own cats to the press conference but his mother Barry Neepawa was notably absent.  Neepawa’s Aunt Rodger was on hand to lend her support.

“Billy’s mom Barry would have loved to be here but she has allergies, not to cats but nonetheless,” Rodger Norwood offered.  “Billy’s got a lot of good ideas and it is time for him to get out of the house and work on them.”

This is the second major announcement in as many days from a candidate clawing his way to the top, and pairs nicely with the proposal to build a tunnel under Crescent Lake to Island Park, aptly named the “Crunnel”.

“Our new cat park will be called Portage Pussy Park or PPP for short,” Neepawa explained.  “It will become a destination for cat lovers from around Manitoba and increase tourism ten times from what it is today.  The sight of cats frolicking free and unencumbered will be inspiring.”

The new candidate was short on specifics on how he would fund the construction and maintenance of the new park and tourist attraction.

“I’m not sure where we would get the money but I’m sure we’ll find it.  The budget will kind of sort itself out.  I’m sure the city has accounting people to handle all that boring stuff.”

Portage Pussy Park will be built on beautiful Island Park and be featured on a new website complete with a snappy logo designed by firms and individuals living and working outside of Portage and area.

The park will have unique features like a puke pen, giant litter box for children to play in, lawn bowling with hair balls, cat fighting ring and an organic cat nip zone.

“I think this is the purrrrrfect time and the purrrfect place for this idea,” Neepawa said to cheers and chuckles to the mostly partisan crowd.  “The time is meow,” he further punned.

It is important to note that during the press conference one of Neepawa’s cats urinated in Neepawa’s backpack, an orange cat vomited twice and another hissed and swatted at an attending member of the media.  In general, his felines appeared to be well cared for but socially unstable and hostile at times.

Neepawa ended his press conference by thanking his supporters, elementary school teachers, a friend named Steven along with his neighbour Ross.  He then indicated it was time for him to pussy foot home for a nap.

Notice to readers/disclaimer – click here to read more about the fictional, satirical and occasionally humorous nature of this website and story.  That means it is not real.  You can’t actually vote for any of these people because they are not real.  While there have been instances where dead people have been elected to office, we know of no examples of fictional characters becoming real elected officials.  Sometimes people who are elected seem like made up characters but they are not.  Please do not donate to any of these or any other fictional candidates election efforts.  Those moneys will not be tax-deductible and you likely just gave some money to someone who will waste the money and quite possibly commit atrocities with the funds.  Remember let’s make Portage la Prairie beautiful, great, totally amazing and cat appropriate again.  Thank you and have a great night.