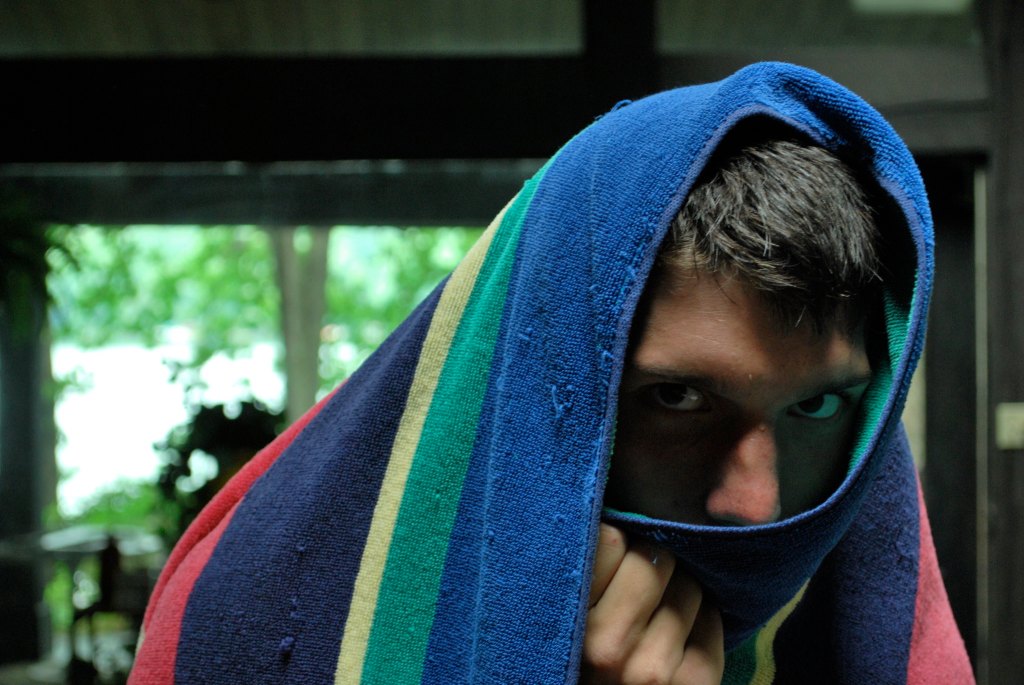 Kenny Barnes' wife Brenda sent his hockey towel that has not been washed since 1992 for testing and it came back positive for most known viruses and pathogens including sexually transmitted viruses, influenza, mould and fungi. Basically the towel was disgusting.

PORTAGE la PRAIRIE, MB – The towel hasn’t seen the inside of a washing machine since Pee Wee Provincials in 1992 and has called Kenny Barnes’ hockey bag home since.

Kenny’s senior hockey season is over so his bag has been sitting open with his personal hockey towel sitting at the top.  His wife, Brenda, is a lab technician and thought she would try and convince Kenny that washing the towel would be a good idea and bring him good health rather than bad luck.

“The towel has a permanent stiffness to it and it’s hard to say what colour it really is anymore,” Brenda explained.  “I took it to the lab to run some tests.”

The results were shocking and Brenda promptly sent the filthy towel to the incinerator to stop it from infecting anyone.

“Almost every known virus and pathogen showed up in the testing,” Brenda said.  “It had every type of influenza, sexually transmitted viruses, blood borne pathogens, fungi, mould and every body fluid there is.  No wonder it smelled like concentrated ass.”

While a little surprised by the test results, Kenny wasn’t troubled by the contents of his favourite towel and was annoyed at his wife for disposing it.

“That’s my lucky towel,” Kenny said.  “Just like my gear, you never wash your hockey towel.  You just let it sit at the top of your bag so it dries a bit between games.”

Barnes has fond memories of using the towel to wipe his sweat between periods, him and several members of his team using it to dry off after showering, and the fuzzy fleece substitutes as a napkin during post game snacks.

“The boys are going to be pissed when they find out the towel is gone,” Kenny shared.  “It has helped so many over the years.  The night Brad had diarrhea on the bench and had to leave the game early and get himself cleaned up.  The time Shane crashed hard into the crossbar and cut his head open bad. That towel helped him get to the hospital.  We’d use it almost every game to whip each other on the bare ass to get fired up.  And who could forget passing it around between periods for everyone to blow their nose.”

“There is a little bit of all the guys I’ve ever played with over the years in that towel,” Barnes reminisced.  “The smell could instantly transport me to the rink and the room with the guys.  I loved that towel.”

The lab also noted several pieces of toe nail from different donors embedded into the material along with samples of matted hair from various people and parts of the body.  The towel also carried numerous cigarette burns and significant assortment of alcohol.

“It had a really cool blood stain that looked like Don Cherry and BBQ sauce stain that everyone thought looked like Gretzky,” Barnes said.  “That towel was there through thick and thin.  There were lots of nights when I’d be the only one who remembered a towel.  That’s why I always left it in my bag instead of washing it.”

Barnes notes that he felt the towel self-cleaned when he or a teammate would wipe the excess shampoo off their bodies or when it would drop on the floor of the shower.  The shower floor is the place where many players choose to urinate over a toilet or urinal.

“I know everyone these days are worried about viruses and getting sick but I think that towel kept the whole team healthy.  Our immune systems have been exposed to everything through that towel.”

Brenda credits the large amount of alcohol consumed after games as perhaps the only thing that kept most of the team from being poisoned by the disgusting towel.

“I’m just thankful no one got flesh-eaten disease from a scratch from one of those toe nails.”

For father’s day Brenda plans on buying Kenny a new bath towel as a replacement and hopes the team will find it more acceptable if it stays in Barnes’ hockey bag until the season kicks off.

Notice to readers – click here to read the full disclaimer and disclosure.  Hockey towels are real things and most are totally disgusting.  While this story is completely fictional and made up, we still couldn’t mention some of the absolutely gross things that have been done and continue to be perpetrated on towels in hockey dressing rooms.  Sadly, many events in this story are true, like the part about pissing in the shower but the context and characters are imaginary.  We are not aware of any towel being tested but we are sure that if it happened in the future all manner of grossness would be found.  If you have a hockey towel in your bag right now, in the interest of public health safety and for the sake of your own well-being please wash it.  But wash it alone in an abundance of bleach and then let it lay in the hot sun for several weeks.  Only then should you consider re-using it as a towel.  It is a miracle more hockey players don’t get sick after wiping their wet ass with the towel and then grabbing a snack, placing it on a bench that has seen more bare arses than you could imagine, then putting in their mouths.  Stay safe.