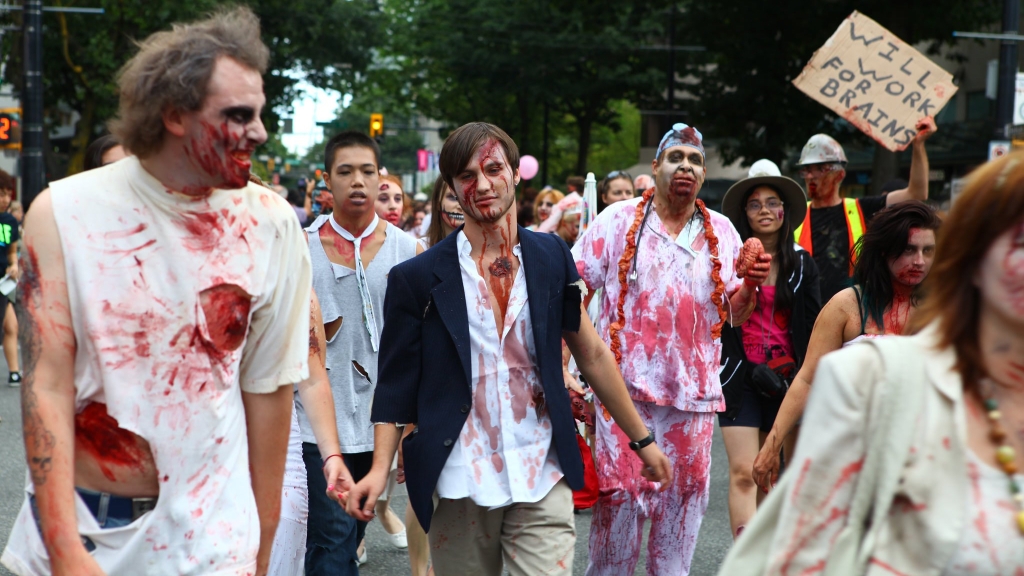 Zombie apocalypse responsible for recent crime wave. Residents told not to worry and how it is an economic and tourism boon

Many Portagers are breathing a sigh of relief after civic authorities and officials calmed resident’s nerves by explaining the recent wave of violent crime away as the beginning of a zombie apocalypse.

“Our (living) citizens have nothing to be concerned about when it comes to the latest incidents of violent crime,” Mayor Sherman Moffat explained.  “Investigators have confirmed most of the violent crime involves local zombies so regular Portagers have nothing to worry about.  We are having a small zombie apocalypse but we are told police have it under control.”

“When I first heard about murders, assaults, shootings and machete attacks I was afraid for my life,” Neil Westpond from the north end said.  “Now that I know it is zombie related, I’m not as nervous.”

Zombies are generally defined as partly alive humans who have risen from the grave retaining only base faculties and existing in a near mindless state.  Many employees of CIPP-TV fit this description.

Zombies are void of emotion and personality and many have reflexively returned to routine duties and jobs of their past life.  Numerous local zombies are employed as the majority of employers prefer their disposition to the living Portagers.

While the growing number of local zombies is becoming somewhat apocalyptic, civic officials point out the tourism potential of the outbreak.

“We believe with another redesigned logo and a snappy website created outside of Portage, we can attract zombie fans wanting to witness an apocalypse first hand,” Mayor Moffat said.  “We hired an outside consultant and they told us zombies are great for tourism.”

The city does advise residents against being bit by a zombie.  “Anyone who gets bit should turn themselves into local police,” Moffat recommends.  “You will become a zombie if bitten by one and you will have to be exterminated.”

Eventually, the city of 13,000 living souls will be over run by several thousand walking dead but until then, Portage will stand to gain financially from the increased attention.

“Me and some buddies are planning on going out zombie hunting this weekend,” Westpond said.  “We’ll start at the Mall since there hasn’t been any life there in years.  It’ll be fun.”

Zombies are best eliminated by severing the head from the body permanently but officials warn against approaching zombies in a hostile manner.  Zombies may be slow and plodding but they are capable of violence and biting.  They exist primarily to spread the zombie virus and to eat brains.

“Our highly paid consultant mentioned it was odd there were so many zombies in Portage as they are normally attracted to brains,” Moffat said.  “No matter why they are here, we are just happy for the tourism and media attention.”

Notice to readers/disclaimer – click this link to read about the true nature of this story and website along with finding handy-dandy additional links to important legal information.  Those far less interested and who have already figured out this story and website are fictional and satirical and possibly humorous can simply know that their suspicions were correct and this is all made up.  That is what fictional means.  Satirical means we are poking fun at reality in an unreal way.  We will leave it up to you to figure out what we are making fun of and whether it is funny or not.  We are not the Supreme Political Leader of Portage la Prairie and do not desire to censor your thoughts or control what you read.  Free Melania!