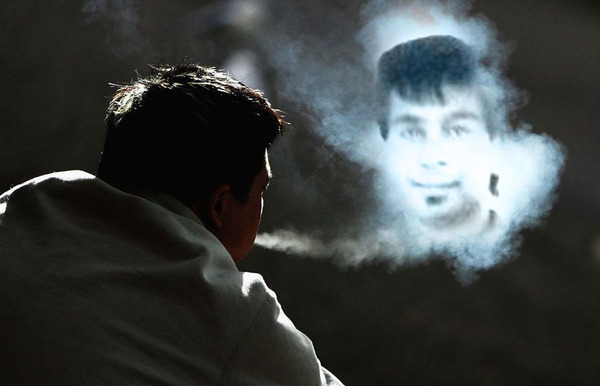 Undercover investigation unearths a soul dealer in Portage la Prairie in possession of over 500 local souls.

A secret, underground soul dealer operating in and around Portage la Prairie was found in possession of the spirits of over 500 people during a recent C.I.P.P.-TV Channel 116 investigation.

MBN News reported Portager, Aaron MacDonald, sold his soul online to a man known only as “Jerry”.  MacDonald was unable to locate the buyer of his soul after suffering from seller’s remorse and was forced to search for a replacement soul.

Investigative reporters dug into the matter to find countless stories of desperate Portagers who had parted with their souls for cash or other considerations.  Posing as willing buyers of these liquidated spirits, MBN News was able to locate a local man known as “Jerry” who has been buying souls for over a decade in the Portage la Prairie and MacGregor areas.

Our reporters met up with “Jerry” to make a purchase and found his downtown property warehousing at least 500 souls.  Although “Jerry” refused to provide his full name, he was willing to share knowledge of his inventory with our reporters.

“My basement and back shed is pretty much full of shoe boxes with a great selection of souls,” Jerry explained.  “For a young soul I generally ask for a thousand dollars.  For an older, damaged or worn out soul I can let them go for as little as a hundred.”

Jerry stores the souls in empty shoeboxes in his musty basement and oversized garden shed.  Surprisingly, the souls are invisible to the naked eye but all weigh differing amounts.

“You can tell how old the soul is generally by the weight,” Jerry said.  “The more damaged, broken and beat up the soul is the heavier.  Normally kid’s souls weigh less than half a pound but as life grinds you down the soul starts getting heavier.  Adults souls with a ton of baggage and hard miles can weigh up to ten pounds.”

The Portage soul gatherer admits the buying and selling of souls is not illegal but demanded anonymity to avoid public scorn for his unethical practises.

“A lot of people around Portage know what I do and they are okay with it, but there are a lot of other people who would look at me differently if they knew what I do in my spare time.”

According to Jerry, the souls will last indefinitely stored in simple cardboard shoeboxes but will lose a little bit of their original energy if left too long.  He employs a first in, first out practise when dealing his souls.

“I don’t like them sitting around too long before they get used.  Best to keep them fresh.”

While Jerry buys most of his souls locally, he has a policy not to re-sell any of the spirits to Portagers to avoid people recognizing their souls in neighbours, co-workers or family members.  Portage la Prairie and MacGregor are active soul gathering regions making the Central Plains a large net exporter of souls.

“Most people wouldn’t be surprised to hear I get a lot of souls from local politicians, executives and sales professionals,” Jerry shared.  “But we do get quite a few calls from pastors, musicians and factory workers, and that might shock a few people.”

Jerry points out that most people looking to liquidate their spiritual assets are not desperate economically challenged people but rather those who do not feel they need theirs anymore.  Interestingly, he does little advertising on the dark web for his souls, opting to post on local bulletin boards and online shopping groups.

“A lot of my customers prefer to get through life without the burden of a soul and the joy it can bring,” Jerry said.  “Many don’t enjoy the obligations having a soul requires like caring, loving and forgiving.”

The Portage area has a higher than normal rate of soullessness than the rest of Canada thanks in part to Jerry and his work.

“This is a silent boon to economic development,” Jerry said.  “I’ve probably bought and sold over five thousand Portagers’ souls in the last five years.  All that money is staying local.  I pay taxes and all this money will get circulated a minimum of seven times.”

Both City Hall and The Economic Development Office declined to comment on the business of soul selling but sources inside both institutions tell C.I.P.P.-TV say many members of those institutions are intimately aware of Jerry’s business model.

Notice to readers/disclaimer – click here for the full disclaimer and disclosure on the true but non-sinister nature of this story and website.  They both fictional and satirical in origin.  While based loosely on rumours and theories about the goings on of Portage la Prairie and area this story is completely fanciful and ridiculous.  No one is buying and selling souls.  That is crazy.  Do not try to trick your friends into giving you money for you soul after you send them a copy of this story.