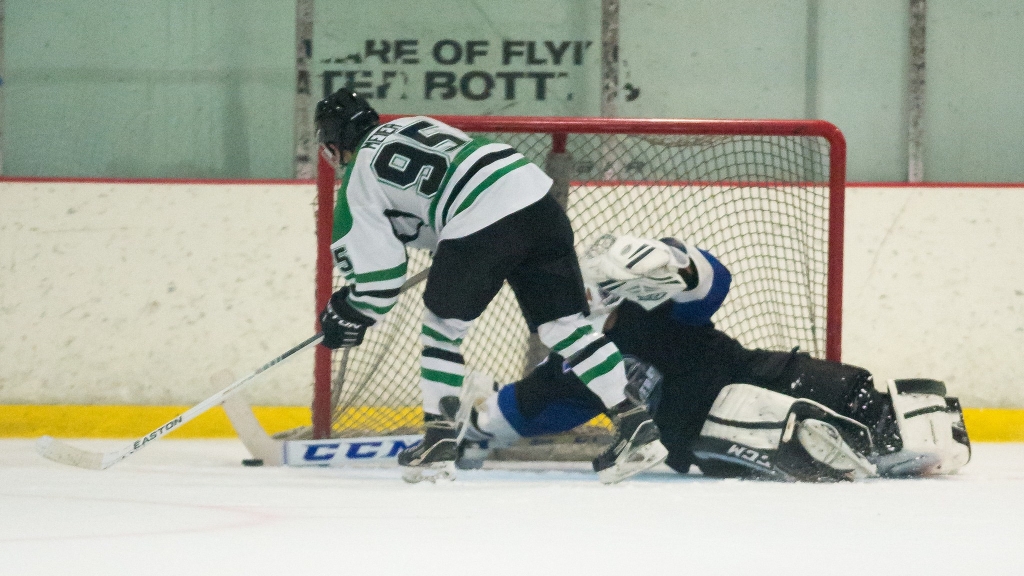 The St. Claude Voyageurs of the Manitoba Junior B Hockey League sent a strong and clear message last night in a game they lost 11-1 to the Roland Pumpkin Express.  With only three minutes left in the second period Pumpkin Express forward and captain Gord Klassen rifled a shot past St. Claude goalie Mark Toth to put Roland up 9-0.  Following the ensuing faceoff Voyageur right-winger Josh Wexford took the puck hard to the net, intentionally knocking Roland goalie Peter Schroeder to the ice while sending the net flying.

“I wanted to get my team fired up, get them going, get us back in the game,” Josh Wexford told C.I.P.P. TV’s “Get The Puck Out” after the game.  “We needed a spark so I did what I could.”

Wexford found himself on the losing end of a fight and saddled with a 3 game suspension.

“Wexy was a real team player,” Voyageur Head Coach Brian Hannah said.  “We got down 9-0 and needed to try to get us back in the game.”

Voyageur coaches and players were unable to explain how hitting a vulnerable goalie would help them get back in a game they had no chance to win, leading many to speculate the move was just one of spite and revenge.

“Sure we had fewer shots than they did goals by that point but I like Wexy’s heart and thirst to win.  He has great compete,” Hannah said.  “The only thing we were trying to get even was the score.”

The controversial move did result in St. Claude breaking Schroeder’s shutout bid with Jacques Brouseau scoring on a breakaway late in the third period when Roland was no longer even trying and playing mostly third and forth line players.

“I think we really showed the hometown fans and the league what we’re all about,” Hannah said.  “It’s doesn’t matter if it’s 1-0 or 9-0 we’ll capable of doing whatever it takes to win.”

With only 2 wins so far this season St. Claude has certainly shown they regularly don’t show up to play until the score is out of hand and they have no chance to win.  A point coach Hannah disagrees with.

“You never know.  That could have been the spark to help us score ten goals in under 25 minutes of hockey,” Hannah pointed out.  A task they haven’t been able to accomplish in over three seasons having only scored a maximum of 4 goals in any one game in that time.

“We are really trying to work with these young men and install in them the type of character it takes to win in hockey,” Hannah said.  “This isn’t kiddie play time, this is Junior B hockey and our players know what’s on the line.”

Rarely, if ever, do Junior B players older than 17 ever make to professional levels of hockey so at best, the majority of St. Claude’s players will go on to play Senior hockey and recreational beer leagues.

“Part of our recruiting pitch is that we have a long list of players who have gone on to a few senior leagues around the province and many more who have become stars on their late-night beer league teams,” Hannah explained.  “Our boys really get the drinking beer thing down during their time with us.”

Notice to readers/disclaimer – click here to read the full disclaimer and explanation about the fictional and satirical nature of this story and website.  You really shouldn’t need an explanation to realize this story is fictional.  Fictional means made up in case you were about to google the word fictional.  But by all means read the disclaimer and then read the additional legal information if you are confused at all.  We created these links because scientist have failed to find a cure for stupid.  Until they do we are forced to treat the symptoms with explanations like this.  Ya.