Portagers are reporting a strange phenomenon that began shortly after the online holiday shopping season started on cyber Monday.  Weird lights and odd visitations are happening in all areas of Portage la Prairie with a spike in activity in KoKo Platz and Mellenville. 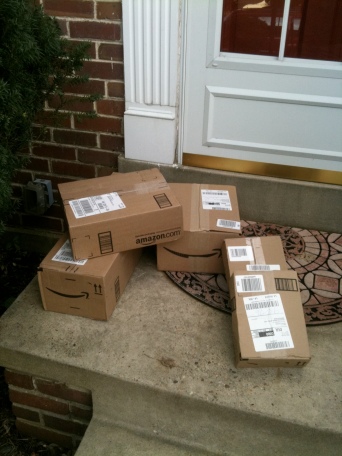 “Every night between like five and seven I see flashing orange lights and I hear a strange noise,” concerned Portager Ida Rawlings said.  “Last night I noticed the flashing lights and then my doorbell rang.  I went outside but all I found was a package on my doorstep with a big smile on it.”

Rawlings and others are claiming to be victims of what police are calling, the Portage Flasher.  They say one or more men in vans are trolling the streets of Portage la Prairie leaving various sized boxes on doorsteps, ringing the door and leaving before anything more than a flashing orange light can be seen.

“Right now we don’t think the flasher is intending any harm,” said police spokesperson June Mervin.  “While some residents feel the flashers actions are lewd, we don’t have any evidence there is anything sexual or malicious behind the actions.”

Police claim there is no threat to public safety but do ask citizens to remain alert and cautious of the orange flasher and the random packages he/they leave behind.

“We have seen a dramatic increase in reports that we think is tied to a rise in online shopping but we are unclear of the exact connection,” Mervin said.  “We would like to find the person or persons responsible and talk to them.”  Mervin adds the police do not have any charges pending nor is it a criminal investigation at this point.

“There is definitely a flasher, maybe more on the loose in Portage,” Rawlings added.  “The police should do something before someone gets hurt.”

Rawlings believes the flashing and boxes on doorsteps are linked to online shopping but feels the situation is getting out of hand.

“We see those flashing orange lights every night and boxes left on our doorstep a couple of times a week.  It used to be a man in a red suit would leave presents one night a year but now that’s being replaced by some crazy orange flasher no one can identify leaving stuff unattended on doorsteps every night,” Rawlings said.  “It’s like living in a horrible, never-ending game of ding-dong ditch.  It has to stop.”

The city is urging calm during the hectic holiday season and is promising to instruct local police to step up patrols to protect against further flashing incidents.

“While it seems weird that boxes with expensive goods are being left on doorsteps throughout the city with little or no protection, we don’t think people should be scared to go about their normal business,” Mervin offered.

Rawlings and other citizens do not share the same confidence and say they are terrified to leave their home in case the flasher strikes and leaves boxes of gifts unattended on their steps.

“I know there is hardly any crime in Portage but leaving big boxes of gifts outside with no security just might temp some one to start stealing,” Rawlings said.  “I’m scared.”

Police indicate there have been no reports of stolen boxes from doorsteps but they will be vigilant in their quest to identify the flasher.

Notice to reader/disclaimer – click here to read more about the fact this story and website are creations of fiction, often satirical and occasionally funny.  It is hard to believe in 2018, almost 2018 that people would think this kind of story is real.  In case you do have a leaning to believing this is an actual news story you will have to read the whole disclaimer and explanation.  Although, the full disclaimer will likely confuse you further if you are not able to understand this short version.  Blah, blah, blah, don’t be stupid, have a laugh, share with a friend, have some eggnog.